As you may know, Chinese New Year dates vary slightly between years, but it usually comes during the period of January 21st to February 20th. The dates change every year because the festival is based on the Chinese lunar calendar. This year, the Chinese New Year is exceptionally early, having already started on Saturday January 25.

The Rat and stock markets

One of the brokers we work with in Asia, CLSA, puts out an annual Feng Shui Guide as an alternative look at what’s in store for the new year to help luck flow in your direction. That also includes a forecast for what will happen to financial markets in the year ahead. Obviously, this is to be taken with a grain of salt. Still, the forecast goes as follows (see chart below). The year begins well. Early on, there may be legal measures that improve business conditions, perhaps the removal of red tape. The following months should be nice. Expect gains in all sectors through to the summer. Over the hotter months, the profits are less impressive, but they are there. As the days lengthen, the relentless heat has the Rat swooning, ending up in a sleep coma. In the last quarter, a few rattles of the cage will reawaken markets to finish the year just below the summer high. Not too ratty. Again, to be taken with a grain of salt.

What happened in previous Rat years?

Some of the highlights of those previous Rat years were as follows. In 1972 US President Nixon visited China, the cross-harbour tunnel in Hong Kong was first officially opened and Lee Kuan Yew got re-elected as Singaporean Prime Minister. In 1984 the tile-matching game Tetris was first launched, Svetlana Savitskaya became the first woman to moonwalk in space and the IRA bombed a Brighton hotel where Margaret Thatcher was staying. In 1996, the first direct presidential election took place in Taiwan, the Beijing-Hong Kong rail line was opened, Bill Clinton got elected as the 42nd President of the US and Norwegian Borge Ousland crossed the Antarctica on his own. Finally, in the not so pleasant year for stock markets, 2008, the gold price passed $1,000 per ounce, Barack Obama was elected as the first black President of the US and Cristiano Ronaldo won his first FIFA world player of the year award.

When we will be making a similar overview of news highlights at the start of the next Rat year (2032), one of the key news items of the current Rat year (2020) will undoubtedly be the spread of the Wuhan virus. And strangely enough, that might be what causes the initial stock market correction (as mentioned on the chart above). But still, with a grain of salt. 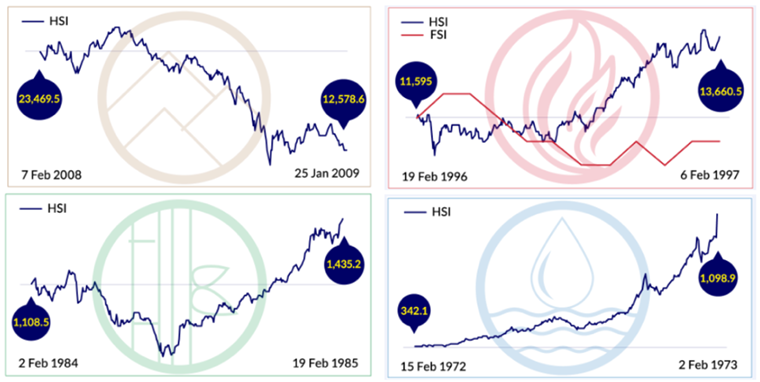 Which sectors to buy or avoid?

In Feng Shui, all industries are divided into one of the five elements. Each year, wood, fire, earth, metal and water dance around each other, some ruling throughout, others bursting out for a month or so. A Feng Shui master worth his salt will assess the relative strengths of each element at any given time; even the weakest element will come to the fore at some stage, you just have to be there for it. Portfolios perform best when the elements are equally weighted, so you can adjust your investments to get the best possible results. Remember that wood fuels fire; it, in turn, produces earth; metal comes from the earth and produces water, which is a fundamental ingredient for life and needed for wood to grow. Conversely, water puts out fire; fire melts metal, making it weak; metal can cut through wood; and wood overcomes earth as roots grow down into the soil and use up nutrients; earth overcomes water as it channels water to where you want it to go.

All of that means one might be tempted to expect “good” results for healthcare, consumer discretionary, consumer staples, financials and banks. Even better, “great”, performances could be expected from property and resources sectors. Finally, a more “mediocre” return might be anticipated in telcos, internet, technology, utilities, leisure and hotels.

But maybe we should just stick to what we know best at Econopolis: fundamental bottom-up stockpicking, conviction-based portfolios, a long-term investment perspective with sustainability at its core, and favouring well-managed industry leaders with sustainable competitive advantages, solid balance sheets and good growth prospects. Maybe that will continue to do the job, instead of letting faith determine our financial success in 2020 and beyond!